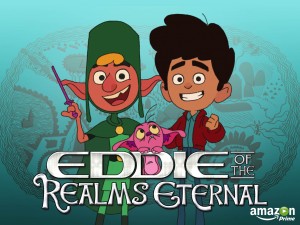 The young heroes of director Paul O’Muiris’ self-aware Eddie of the Realms Eternal wormhole between reality and fantasy. One is a slacker elf called Hobi, and the other is a regular dude named Eddie. And together, they’re descended from (much more) mythic ancestors whose union for generations protected the Realms Eternal from evil — until now. It’s a perfect set-up for a buddy comedy adventure, with deep but accessible roots.

“When Amazon Studios came to us with the script, I felt an odd connection to this story about a lonely little kid pulled out of school into a fantasy world of magic and monsters,” O’Muiris told Cartoon Brew. “Then I realized why: Bob Roth and Bill Motz, the writers and creators of Eddie of the Realms Eternal, had written for many of the Disney television shows I’d grown up with, like Aladdin,Hercules, and Tarzan.”

Nora Twomey talks about working with Angelina Jolie on The Breadwinner