Nora Twomey has been working closely with Hollywood heavyweight Angelina Jolie on her latest film project, The Breadwinner.

The animated film is based on the bestselling children’s novel of the same name by Deborah Ellis, which tells the story of a headstrong young girl living under the Taliban in Afghanistan, who is forced to disguise herself as a boy to provide for her family.

Jolie, 40, joined the project as executive producer during the summer, and has played a vital role making sure that it does justice to the subject matter.

The film, due to be completed by early 2017, marks a milestone in Twomey’s career. Not only is it a departure from her previous film projects, which were based on Irish folklore – she co-directed The Secret of Kells(2009), and was head of story and voice director on Song of the Sea(2014), which was the opening film of the European Film Screenings in Abu Dhabi and Dubai in October – it is also her solo directorial debut. 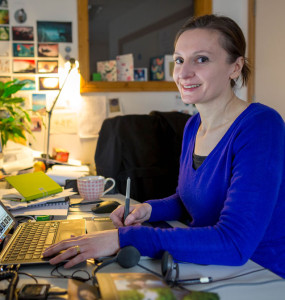 “Once I’d read the book, I knew I wanted to direct this film,” she says.

“It’s a great challenge for us in the studio to try to tell a really simple, strong, profound story from this part of the world, which you hear about a lot in the news.”

“Angelina read the script, looked at the artwork with her children, and really loved the approach we were taking. I think she involves her children in lots of her decisions and certainly shows them things that are of interest to them. They helped her to make the decision to be involved in the project. It’s the kind of film that they like.”

Due to Jolie’s hectic schedule, Nora, 44, has been flying out to meet the Oscar-winning actress and run ideas by her, although Jolie has promised that she will drop by Cartoon Saloon, to see production in full swing.

“I’ve been taking the work to her as much as possible,” says Nora. “We’ve been meeting in London where she was based over the early autumn. She’s now also prepping for her next film, which is set in Cambodia, so she’s tremendously busy.

“It’s a difficult story to tell in many ways. Angelina is so sensitive about the whole thing. She understood what we were trying to do and has helped guide us quite a bit. She is a hugely important part of this project.”

In her role as a special envoy for the United Nations High Commissioner for Refugees, Jolie regularly visits areas of conflict around the world. She has been to Afghanistan at least twice in recent years, and funds a girls school north of Kabul through profits from her jewellery ­collection.

“Angelina is so knowledgeable about Afghanistan and other areas of conflict, and she really means it – it’s something that she thinks deeply about and understands the complexities of,” says Nora. “She has a very sensitive view of what its like to live there. Having help on the story from somebody who really understands the subject matter has been priceless. And having a fellow filmmaker to talk to about the artistic elements of the film has been fantastic.”

Jolie is donating all the proceeds from her work on The Breadwinner to the education of Afghan girls. She was also keen for it to be as authentic as possible.

“Angelina was adamant that we try to find as many cast as we could from the Afghani community in Canada, where we were recording the voices,” says Twomey.

“We found amazing Afghan and Pakistani and Indian people who had a lot of experience as actors. I just came back from recording the voices, and the depth to having a cast like that just adds so much to the film.”

Jolie’s voice, however, will not be heard on-screen.

“But for us, it wasn’t really a problem. The Breadwinner is so strong in its story, we didn’t want attention to be focused on one specific aspect.”

Nora, who is from Cork, has not been to Afghanistan, but has worked closely with Afghani consultants.

“That really helps us with the authenticity,” she says. “The beauty of animation is that it’s part artistic expression, part reality, so we’re trying to merge the two. It’s not an absolutely photographic representation of Kabul, but more of an artistic representation. I’ve tried very much to create the look of Kabul – the colour of people’s clothing versus the brownness of the houses up against the hills. It’s a very ­specific-looking place. I think we’ve managed it.”

There are also plans to release The Breadwinner in Dari and Pashto, the most widely spoken languages in Afghanistan.

Twomey describes Jolie as “warm, friendly, and very down to earth.” “Angelina is really collaborative and in a way that is without ego, really.”

Jolie’s husband, Brad Pitt, also has a cinematic interest in Afghanistan. His latest film, War Machine, revolves around the US invasion of the country. The production came to Abu Dhabi in October and filmed in the capital for about a month.

The Breadwinner seems particularly relevant given that the Taliban is waging a spectacular comeback in Afghanistan, but Nora says the film’s themes are timeless.

“The most attractive thing for me was to tell a universal story that everyone can identify with,” she says. “Children always find themselves in situations where they have to take on more than they should. And the main character, Parvana, is strong, but she is also human and flawed. She’s not a princess.”

Jolie said: “I am delighted to be working with a talented team of artists who I know will do justice to the richness, creativity and strength of Afghan culture and to little girls like Parvana.

“Millions of young girls like Parvana are growing up today under oppression or conflict, and helping their families to survive in those conditions. This story is a reminder of the immense value of their contribution.”