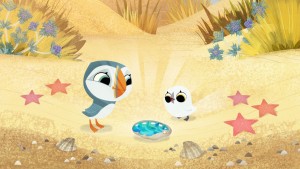 Puffin Rock, the award winning animated Pre-school series returns to RTÉjr next Monday 22nd February at  11.20am and 3.40pm, weekdays on the channel.

Puffin Rock follows a family of lovable puffins living on a wild and beautiful Irish island. Young puffling, Oona, and her little brother, Baba, explore the island with their friends and their stories are filled with laughter and adventure. Puffin Rock has a gently educational tone, appealing to 2-6 year olds and their parents. As narrator, Chris O’Dowd (Calvary, Bridesmaids, Moone Boy and The IT Crowd) adds an extra sprinkle of comedy, mixing amusing observations with interesting facts about the wildlife of the island.

Puffin Rock has just picked up 2 awards at Kidscreen in Miami recently for Best New Animated Series and Best Preschool Series as well as a Royal Television Society NI Award for Best Children’s Animation and being nominated at this years’ Annie awards in LA, for Best Music and Best Production Design.

The co-producers of Puffin Rock gratefully acknowledge the continued funding support of Northern Ireland Screen and The Irish Film Board in the production of Puffin Rock.

Fionnuala Deane, Managing Director, Dog Ears Ltd: “Its exciting times for our Puffins, after two awards at Kidscreen, we can’t wait to watch series 2 make its global debut on RTÉjr. We hope the RTÉjr audience love it as much as series 1.”

Paul Young, CEO, Cartoon Saloon: “Congratulations to all our crew on the debut our second Season of Puffin Rock on RTÉjr next week and on the back of two major Kidscreen awards voted for by international Broadcasters. There are Books and games to follow this year too for Puffin Fans in the UK and Ireland!”

Pauline McNamara, Executive producer, RTÉjr: “Puffin Rock has been delighting and entertaining RTÉjr viewers on television and on the RTÉjr APP since its launch on the channel last spring. We are thrilled to have a whole new series of beautiful episodes coming on stream to build on that success. And we’re particularly happy to see the international children’s television industry acknowledge the special quality in Puffin Rock with two prestigious Kidscreen Awards in Miami earlier this month.”